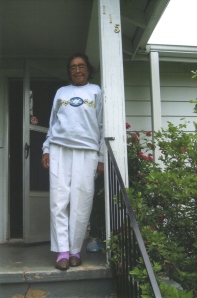 Etta Reid Baker (1913-2006) was a master of a two-fingered picking style that became popular among guitar players in the North Carolina piedmont after the turn of the twentieth century. She was born in 1913 in the Johns River community located in the foothills of Caldwell County. Her parents were of mixed race ancestry and both her mother and father music. Etta often said that her earliest musical memories were of waking up to the sound of her father, Boone Reid, playing banjo or guitar. Etta categorized many of his guitar pieces during this period–tunes such as Railroad Bill, Bully of the Town, and John Henry–as “folksongs.” She asserted that it was only after the family moved to Virginia’s eastern piedmont in 1916 that Boone begin to play blues. When they returned to Caldwell County ten years later, blues had become popular there as well.

Etta began picking the guitar at the age of three. “I was so small, I had to lay the guitar on the bed, stand on the floor and play on the neck,” she recalled. Although she gravitated to the guitar, Boone Reid recruited her to play the fiddle and added Etta’s older sister, Cora, who picked guitar, to his banjo playing to complete the family stringband. The trio played in neighbor’s homes and, on occasion, for furniture executives from the county seat of Lenoir.

Etta married Lee Baker in 1936. Baker played piano and was a good singer and he and Etta often made music together. However, he discouraged her from playing outside the home if he were not present. In order to help support what grew to become a family of nine children, Etta took a job cooking at a local café and cleaning at Skyland Textiles. “A lot of times I wanted to go on the road playing my music,” she remembered. “But it was hard to do that and raise a family and hold onto my job.

Through a serendipitous meeting in 1956 her music gained national attention even though she rarely appeared in public. She and Lee decided to drive with the children to the nearby town of Blowing Rock and visit the Moses Cone estate, which had been recently donated to the National Park Service. While strolling through the grounds the family heard a young man playing a guitar. After striking up a conversation, Lee bragged on Etta’s musicianship and the guitarist surrendered his instrument to Etta and asked to hear a tune.  The young man was Paul Clayton and he was so impressed with Etta’s guitar playing that one week later he appeared with a friend, Diane Hamilton, and a tape recorder at the Baker’s home in Morganton.

Five of the pieces that Clayton and Hamilton recorded from Etta, along with documentation of her father Boone Reid’s and brother-in-law Theopolis Phillips’ banjo playing, were issued on a Tradition LP entitled Instrumental Music of the Southern Appalachians. Although the liner notes provided little information on the musicians, Etta’s performances caught the ears of listeners, and particularly young urban musicians who were caught up in the folk revival. Within this circle, Etta’s “One-Dime Blues” was considered such a consummate performance that to be able to play a rendition was considered a hallmark achievement.

Even though her job at Skyland Textile Mill enabled her to scrape by financially, Etta tired of her limited opportunities there and quit her job in 1973 at the age of 60. By now, her husband Lee had died and her children were all grown and out of the house. She had begun to accept a few invitations to perform outside of the home, which were received with acclaim. Etta was soon fielding invitations to play concerts and folk festivals across the country. Her retirement from Skyland gave her the freedom to travel and she took full advantage of the opportunities offered. For a twenty-five year period, until she reached her early nineties and her health declined, she was playing her music daily and reaching ever-growing audiences with her artistry.

Etta Baker received the North Carolina Heritage Award in 1989 and the National Heritage Fellowship in 1991. Her recordings include One-Dime Blues issued by Rounder in 1991 and Railroad Bill and Carolina Breakdown on the Music Maker label. Etta Baker died in 2006.