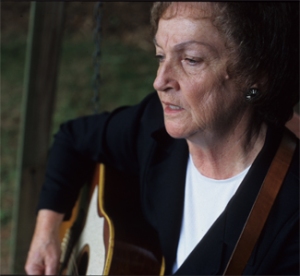 Gary Poe, a native of western North Carolina, has a deep and extensive knowledge of music traditions in the Blue Ridge and I was excited when he offered to take me to meet one of his favorite singers, Dorothy Hess. We made our way to her home not far from Jefferson, North Carolina and had a wonderful afternoon of singing and playing music. In this meeting and through return visits I learned that Dorothy is a very determined person who has overcome many challenges. She was born with a disability that affected her legs and she was sent to a children’s hospital in Richmond, Virginia for extended periods in order to treat the disease. While at the hospital, she would stay connected to her family and home near Lebanon, Virginia by singing the ballads and folksongs that her mother had taught her as a youngster. She learned to play the guitar from her older sister and even performed some on radio with her sisters and mother.

Her performance of “Drunkard’s Dream,” learned from her mother, features her strong, clear and expressive voice. There is not a singer around who moves me more than Dorothy.

In addition to singing, Dorothy enjoys playing the guitar with old-time fiddlers. I love the way she uses her right hand when playing accompaniment. She plays with a thumbpick and brushes with her fingers, producing a sound that is very steady yet uncluttered. Also, she likes to play at a pace that allows the fiddler to utilize more intricate bowing that can make a tune more graceful. This style of fiddle and guitar playing does not generally win prizes at fiddlers’ conventions but it is one of my favorite ways to hear the older tunes rendered.

Dorothy now resides in Wilkes County, North Carolina.  You can read a transcribed interview with her in the guidebook, Blue Ridge Music Trails of North Carolina.