Musicians Rich Hartness and Tolly Tollefson live in Greensboro, NC. Both are outstanding fiddlers; Rich is also a great guitar player and Tolly seems to be able to play anything with strings, including ukulele, bass and guitar. Apart from their musical abilities, Rich and Tolly have earned the love and respect of many for their support of friends and colleagues in the old-time music community.

Margaret and I traveled to Calhoun, Georgia with Rich and Tolly to perform at the 2008 International String Band Festival, which was organized by Patti Champion-Garner, Paul Shoffner and others to honor the legacy of local musical legends the Georgia Yellow Hammers and Andrew and Jim Baxter. We performed a number of pieces that we had learned from 78s recorded by these musicians, including “G Rag.” Our recording of this tune is part of a larger documentation project organized by Rich and features Tolly on ukulele, Rich on guitar, Margaret on banjo and myself on fiddle.

It was a sweet experience for me to participate in the International String Band Festival because I spent much of my early childhood about sixty miles south of Calhoun in Dunwoody, Georgia. I would on occasion visit my Aunt Georgia and Uncle Dewey Stringer. Uncle Dewey kept a banjo and fiddle at the house, and I learned that he had played in a band. Later, after I moved to North Carolina and became interested in fiddling, I returned to Georgia and paid Uncle Dewey a visit. He told me that his stringband was named the North Georgia Buggy Riders and that the fiddle he played had belonged to my great-grandfather, Marcellus Douglas Eidson. 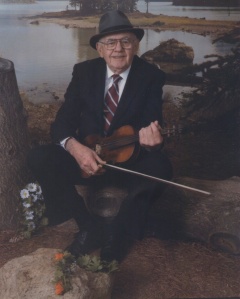 Toward the very end of his life, I would call Uncle Dewey on the phone to keep in touch. He never called but would write me letters. When he passed away his daughter contacted me to say that he requested that my great-grandfather’s fiddle be given to me. I treasure that instrument because of its association with Uncle Dewey and because my grandmother, Mae Eidson Martin, related to me that her father, Marcellus, would take her and the fiddle with him when he drove his wagon into Atlanta to sell vegetables. After he set up, he would bring the fiddle out, play a lively dance tune, and have my grandmother flatfoot in order to draw customers.

When Rich, Tolly, Margaret and I played together in Calhoun, we went by the name New North Georgia Buggy Riders in honor of Uncle Dewey. The name stuck and so did those north Georgia tunes. Whenever the Buggy Riders get together, we jar down on some of our favorites, especially “G Rag,” “Georgia Stomp,” “Forty Drops” and “Bamalong Blues.” For me, Georgia fiddling combines exuberance mixed with the blues and often conveys joy, humor and unpretentiousness. It reminds me of friends and family, past and present, who possess these qualities.